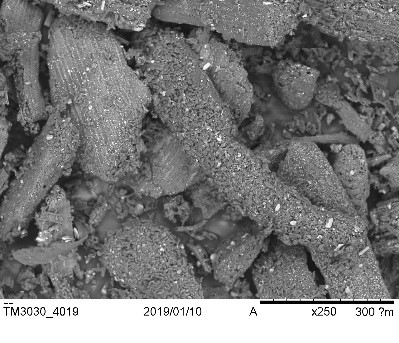 From 28 February 2018 to 31 October 2019 it has received a subsidy in the form of a Research Project from the Agencia Canaria de Investigación, Innovación y Sociedad de la Información (ACIISI) of the Canary Islands Government. Although the Project was requested to be developed in 3 years, at the end only 20 months were granted.

The Project actually started in May 2018. This Project entitled Investigation of the interactions of NOX on semiconductors supported in bioadsorbents, from different vegetal residues of Gran Canaria, and of the efficiency of their elimination, whose reference is PROID2017010034 and its acronym FANOX, granted with almost 70.000,00€. The main objective of the project has been the revaluation of biomass residues from different areas: agricultural pruning, forestry and industrial areas, converting them into activated carbons for the elimination of contaminants in the gaseous phase.

In the project, the FEAM group has focused on the remains of the banana industry, the remains of pine needle and husk from the rum industry. From these residues, synthesis pathways have been developed to obtain activated carbon samples for the absorption of atmospheric contaminants of the NOx type in the gaseous phase. In other words, to try to provide a simple solution, from transformed vegetable waste, to be used in the absorption of these dangerous chemical substances that are precursors of the photochemical smog in cities and acid rain. The Project was awarded because it was well valued and fit within the RIS-3 objectives (2014-2020) established by the Canary Islands Government.

The image match SEM (Scanning Electron Microscopy) microphotographs of activated carbon samples obtained from waste, from left to right, respectively, from pine needle (leaf of Pinus Canariensis from our mountains), from husk of sugar cane (Saccharum officinarum) from the rum industry and from the pruning of the banana agricultural industry (Musa paradisiaca). All these biomass residues have been converted into activated carbons at a temperature between 700 and 800ºC and using potash as an activation chemical additive:

The behavior of these samples of activated carbons during the absorption tests of a stream of NO y NO2 in air, has been very competitive, being comparable to the tests of commercial activated carbons. This Project has consolidated the line of synthesis of activated carbons from vegetal remains within the Group, which had been initiated in 2015 with a focus on the elimination of fungicides in the banana industry, in an aqueous phase (Doctoral Thesis in 2019). The PROID2017010034 Project granted by the ACIISI, has allowed us to activate these residues to be used in the elimination of atmospheric pollutants and will allow us to combine them in the future with the photocatalysts that we also synthetize. In fact, the tests that have been carried out preliminarily, also show a great efficiency in combination with these semiconductors. The Project has allowed, for the moment, to disseminate the results in two publications in impact journals (Applied Surface Science, https://doi.org/10.1016/j.apsusc.2018.10.175 y Applied Catalysis B: Environmental, https://doi.org/10.1016/j.apcatb.2018.12.005) and to participate in the V National Meeting of Photocatalysis Group and 1st Joint UK & Ireland/Spain Semiconductor Photochemistry Meeting (2018).

These deliverables focus on Project Work Package 1: The selection of Photocatalysts. Although the Project ends in October 31 of this year, we have results that will be released soon.

To conclude, we would like to reflect on forest residues and what happened in Gran Canaria during the month of August in relation to forest fires, the elimination and use of pine needle residues through this strategy could be an interesting alternative to keep our forests clean of combustible material, and be able to give it a way out in the form of a business opportunity.